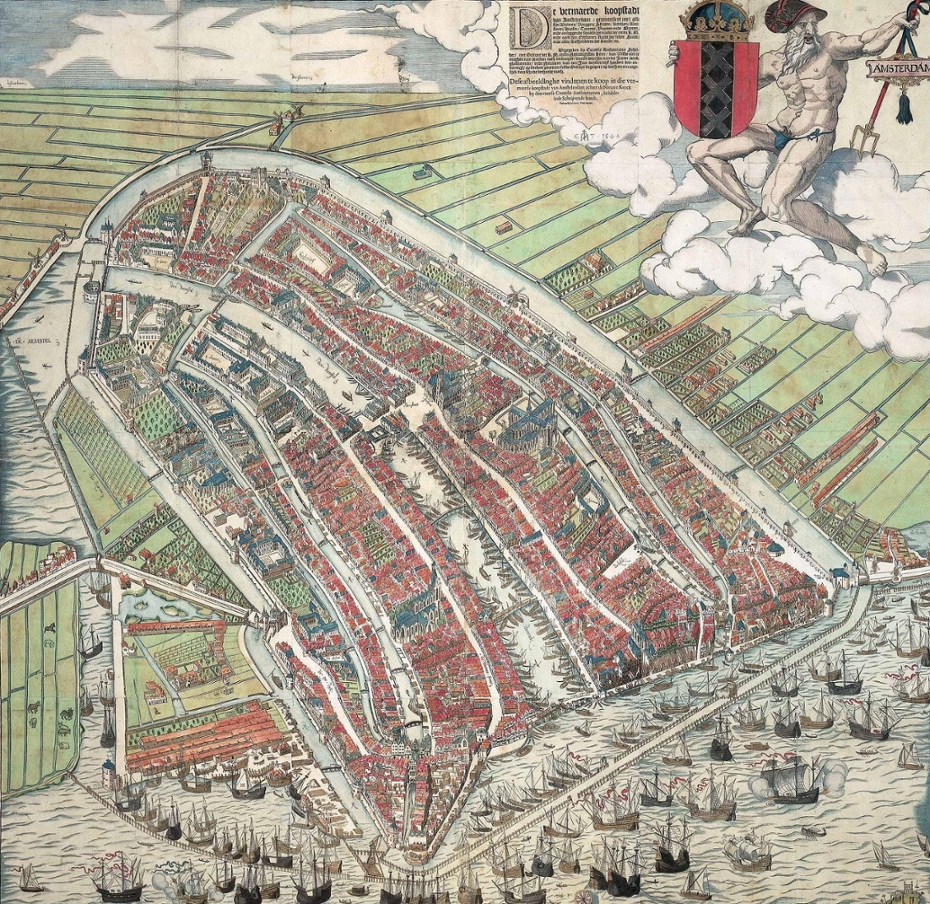 Just a short while back we had the pleasure to share with you the pilot project Living with water in Amsterdam, a cooperation project between two of our Local Time Machine projects, the Amsterdam Time Machine and UrbanHistory4D as proof of concept of our Time Machine community.

We are happy to share with you further in-depth details on this project and its results by our Vice President and coordinator of the Amsterdam Time Machine Julia Noordegraaf. The project results can currently be experienced in the exhibition Fluid Matter – Designing with water in Amsterdam at the Arcam Architecture Centre Amsterdam.

The text below was originally published in Dutch on the website of the University of Amsterdam.

What do historical data teach us about the history of the Amsterdam water system? And how can we visualize that data so that designers can use it to build sustainably for the future? Researchers from the Amsterdam Time Machine are working on these questions in collaboration with, among others, Waternet and the Municipality of Amsterdam. The first results can be seen from 8 July in the ‘Fluid Matter’ exhibition at the Arcam Architecture Centre.

Amsterdam and water have been inextricably linked for centuries. Over the centuries, an extensive network of dikes, pumping stations, locks and weirs has been created in and around the city that regulates the water level. Due to climate change and the need for more housing, this system will be increasingly taxed in the future. This means that choices have to be made, but it also offers opportunities for new ways of dealing with water.

The exhibition ‘Fluid Matter – Designing with water in Amsterdam’ shows life in Amsterdam with water through interactive installations, models, data visualisations, animation and art. Visitors can turn the knobs themselves and discover the effects of those choices on the living environment. At installations of, for example, Kattenburg, the Houthavens and the Van der Pekbuurt, they can test different scenarios themselves.

Dial books from the archives

Student assistant Daan Groot of the Amsterdam Time Machine (ATM) was asked to add historical data and knowledge to the exhibition. ‘Amsterdam has always had a battle with water,’ says Boudewijn Koopmans, ATM project manager. ‘We can look back from Time Machine: What historical sources are there about living with water in Amsterdam? In the archives of the city, for example, water levels can be found in which the water levels were recorded in great detail for a long time. The island of Kattenburg flooded in the year 1775; We have mapped the reference data around that flood. Commissioned by the ATM, design students from the HvA have made an interactive model of Kattenburg for the exhibition in which this is nicely visualized: you can see the water rising further and further.’

In addition, UvA researchers used 3D models and historical photos to create visualizations of what water-related buildings, such as the Marinepaleis, which was demolished in 1968, have looked like over the centuries. In order to make these visualisations, the research group of Sander Münster of the Friedrich Schiller University Jena was co-operated.

Towards a future-proof water system

The contributions to the exhibition are part of the broader project ‘Living with water in Amsterdam’ – a collaboration between Arcam, Waternet, the Municipality of Amsterdam, ATM, AdamNet and the AUAS – which aims to collect, analyze and visualize historical data on water in Amsterdam. For example, work is also underway on a thematic, water-focused version of 3D.Amsterdam, the city’s digital twin. It will contain detailed historical data on, among other things, the water level in the city, the development of the canals and the value of homes in relation to the proximity of waterways.

The aim of the project is to make the public more aware of the functioning and importance of the Amsterdam water system. How do we make that system future-proof in times of climate change? ‘That is an important question for which historical knowledge is indispensable’, says Professor of Digital Heritage Julia Noordegraaf.

‘An example: Nowadays the water level in the city is very tightly adjusted, there is only about twenty centimeters of clearance before cargo ships run aground or canal boats can no longer pass under bridges. While in the past there were much greater differences in the water level: until 1872 there was tidal action in Amsterdam from the Zuiderzee, low and high tide alternated.’ The city and its buildings were also designed for this, says the professor. ‘If you compare that with, for example, the new buildings in the Houthavens – which are so close to the water that very little needs to be done before living rooms are flooded – you see that these days, people don’t think much about this.’

Knowledge of the past is therefore important, says Noordegraaf, also in finding solutions to contemporary problems. ‘For example, you could think about creating overflow areas to regulate the water level in the city, to regain some of the effects of the old tidal effects in the current water system and to allow for a somewhat larger margin in the water level. In this way, historical awareness can lead to insights about climate-proof construction and design for the future.’