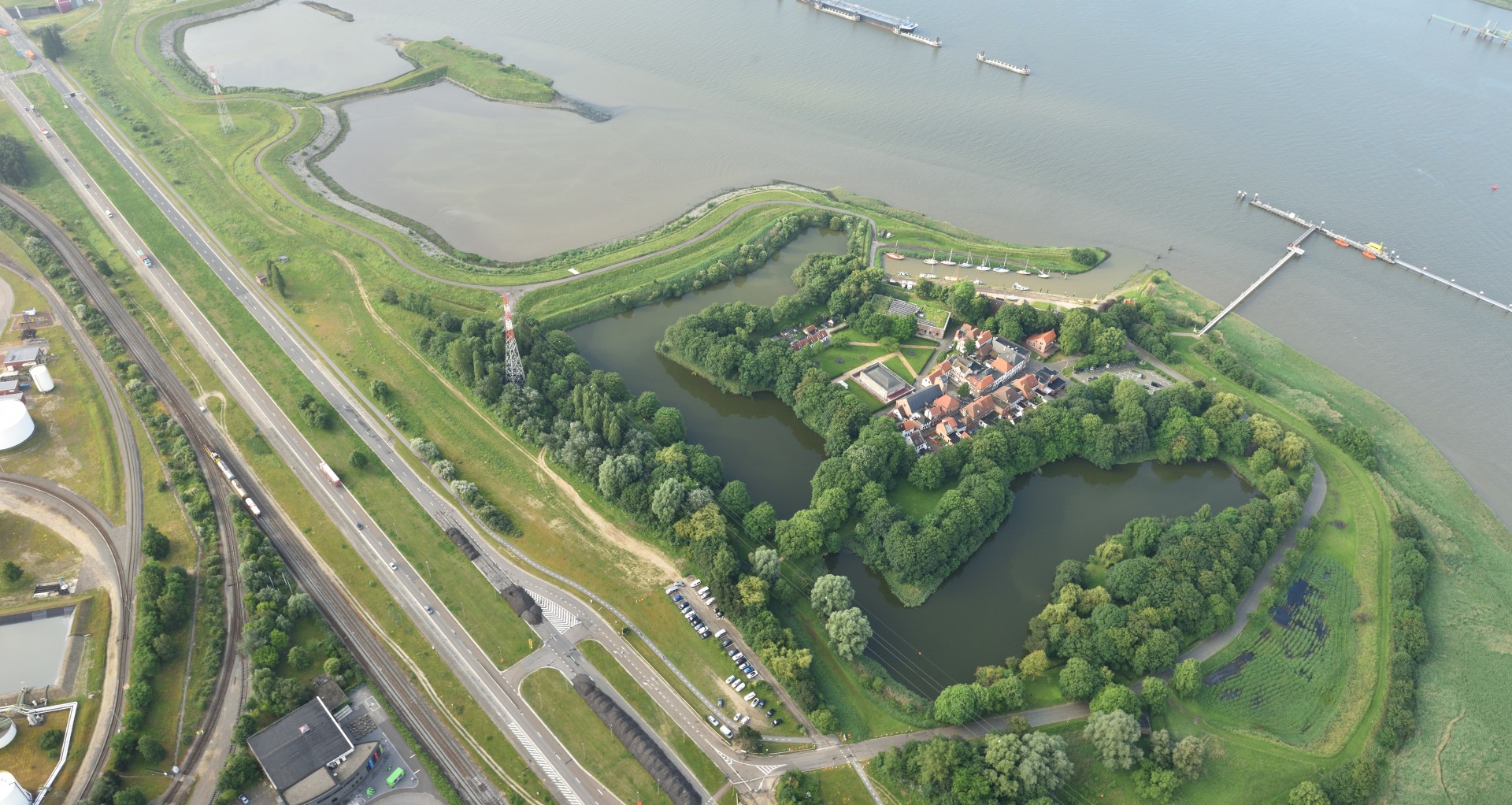 Fort Lillo: Steady as a Rock Through the Course of History

This #LTMThursday invites you to discover the VirtuaFort project – a Belgium-based research project building a Virtual Reality application around Fort Lillo and its immediate surroundings. The article below detailing the origin and progression of VirtuaFort has been kindly provided by the multi-professional team behind the research project.

Just north of Antwerp (Belgium) lies Fort Lillo. Fort Lillo is one of the oldest forts around Antwerp: It was built in 1578-80, together with Fort Liefkenshoek on the other side of the Scheldt, for the military control of shipping on the river Scheldt, the lifeline of Antwerp, at that moment the largest harbour in the world. By imposing toll on all commercial traffic to Antwerp, Fort Lillo has played a major role in the spectacular expansion of Amsterdam and other Dutch cities in the 17th century. Fort Lillo has remained a fortress until the 19th century and continued to be inhabited until today.

The villages around Lillo have disappeared during recent harbour expansions in the 1960s, but Fort Lillo has been preserved as a heritage site. In the coming years, Fort Lillo will go through a process of intensive spatial replanning, mainly initiated from the need for more substantial levees protecting the inland area from flooding. This replanning of the fortification includes reconstructing parts of the – partially disappeared – fortification structure.

To facilitate this process, a true ‘Time Machine’, allowing to virtually travel between past, present, and future of Fort Lillo was designed. To build this Local Time Machine, researchers from the Antwerp Time Machine (University of Antwerp – Centre for Urban History) and the specialised digital heritage company Visual Dimension teamed up with Regionaal Landschap de Voorkempen in a pilot action VirtuaFort within the project RFC (Recapture the Fortress Cities), funded by Interreg Europe and the City of Antwerp. VirtuaFort consists of 3D virtual reconstructions of the historical fortress and its immediate surroundings in 1640 (past), panoramic visualisation of the current situation (present) and 3D visualisation of the masterplan for the future fortress in a Time Machine application that allows to interactively explore these three time periods and switching interactively from one period to another.

As Daniel Pletinckx (Visual Dimension) states: “Virtual reality allows us to experience the past and future of Fort Lillo in an interactive and very realistic way. As we have built the past of this fortress based upon all available maps, written sources and contemporary information, we can claim that this VR experience is the best possible visualisation of that past, you really find yourself walking the streets of Fort Lillo in 1640, so this is the best Time Machine of Fort Lillo we can build today. Also, the visualisation of the future situation, to be finished in 2028, is based upon the detailed plans of the architects, completed with vegetation, street furniture and very realistic materials. VirtuaFort allows you to walk these future streets and paths as if you were really there.”

The historical reconstruction started from a series of historical maps that were retrogressively georeferenced, digitised and enriched with historical data, such as building type or function, in a historical GIS. This data was linked with existing previous archive research by Han Leune, published in the form of an extensive book series, additional high-resolution scans of maps and drawings of Fort Lillo in the 17th century and iconography of contemporary objects, military equipment, harbours and ships. In this way, correct information about the buildings, the harbour, the fortifications and the landscape allowed to make the best possible virtual reconstruction of Fort Lillo.

During this process, the project team did encounter a series of challenges. Iason Jongepier (Centre for Urban History, University of Antwerp) states: “As beautiful as they are, many historical maps prove to contain numerous (local) distortions, making a qualitative, but scientifically based, interpretation of their contents and relation to (un)changing landscape features necessary”.

Furthermore, while historical sources tend to be fragmented and incomplete, a 3D reconstruction asks for filling in all missing information to visualise every part of the given study area. For example, through functional analysis, a plausible hypothesis can be found for the structure of most of buildings. For example, we know from written sources that the house of the Commander of Lillo has a permanent guard and a guard house. On the map, we deduct from the shape of the building that the house is a large rectangular volume with a lower annex, which can be interpreted as the guard house.

In other words, a careful interpretation and interpolation of the available data, house by house, was needed to come to full 3D reconstruction of the fortress in 1640. The same holds for the harbour, where for example a good understanding of the toll process and the daily tide was crucial to the correct virtual reconstruction of the double quay system.

3D models have been created in Blender and Substance Designer. The real-time visualisation has been built on the Unity platform, using Speedtree vegetation and several extensions for landscape, weather, water reflections, etc. The indirect light in interiors was precalculated and baked through the Unity High-Definition Render Pipeline (HDRP), allowing to evoke the correct atmosphere of the spaces in a photorealistic way.

Fort Lillo: Visualisation of the future

Visualising the future of Fort Lillo was a quite different process. The architects of Cluster Landscape provided a SketchUp model of the planned changes, re-using an existing SketchUp model of Lillo.  This SketchUp model had to be heavily reorganised for real-time display and completed with the right vegetation and materials. Several elements from the final architectural plans were added such as bicycle stalls, street furniture, sewer covers, walking paths, elements of the fortification, river embankment, etc. Also, the nature reserves (mudflats) adjacent to Fort Lillo were modelled and added in the visualisation.  Bicycles, cars and boats were added to enhance the views and a listed monument (toll house) was 3D modelled in detail. The central statue on the central square was 3D digitised through photogrammetry from photographs (MeshRoom).

The main goal of this transformation of Fort Lillo is the protection against storm flooding through a higher levee. The integrated storm door at the entrance of Fort Lillo was modelled in detail and animated. This entrance links to the Waterbus, which connects to the city of Antwerp over the river Scheldt, bringing international tourists to the fortress. We have modelled the Waterbus quay, which moves with the tide. On the other hand, we have not modelled the industrial structures that surround Fort Lillo. The real-time visualisation is using the same weather, water, and vegetation systems as the 1640 period.  In both periods, the water level can be animated to show the daily tide (up to 5,5 m) and the influence of the water on the fortress and its surroundings.

The visualisation of the current situation was made through panoramic photographs at a large number of points in Fort Lillo. These 360° images, captured by an InstaOne camera, are used in the VirtuaFort application not only to make a virtual tour through Fort Lillo today but also to timetravel to the past (1640) and the future (2028).  In this way, one can see the major changes that will be implemented in the coming years and compare them with the situation of today, but also how the structure of the fortress in the past was interpreted to design the new structure that will be built by 2028.

Towards the VirtuaFort VR Application

The results of VirtuaFort are in the first place aimed towards the general public, consisting of local inhabitants, tourists and guided groups (tourists are visiting Fort Lillo for its heritage value and its pittoresk, traffic-free character). Wim Debaene (Regionaal Landschap de Voorkempen) states: “The combination of a virtual walk and physical and guided tour brings a whole new meaning to Fort Lillo.  We make heritage more visible through virtual reality. It also proves to be an excellent tool for more sustainable conservation and as a tourist attraction”. This methodology and way of presenting historical data, however, has a large potential to stretch to the academic world that is in a growing need of presenting scientific data to various audiences.

To reach these goals, the VirtuaFort application will be fully operational very soon at a location within Fort Lillo itself, both for guided groups and individual visitors. A first public event took place during ‘Open Monumentendag 2022’ (Open Monument Days, 11 September 2022). This public event led to a very positive response from both local guides, who will oversee demonstrating VirtuaFort, as from local inhabitants and tourists.  More than 400 people visited Lillo, with all 10 VR presentation sessions fully booked.

On 14 October 2022, VirtuaFort was presented and demonstrated at the Historical Landscape Conference in Antwerp, for about 100 historical landscape experts. On the same day, VirtuaFort was also demonstrated at De Kleine Wereld school in Antwerp, were children (age 10) had a wide range of questions and liked very much the alternative way of learning that VR can offer them.

These try-out sessions do prepare for the permanent installation of VirtuaFort in Fort Lillo in the near future, were school groups, guided groups and visitors can experience the past and present of this interesting place in-situ. Visual Dimension has documented the virtual reconstructions and the related background information in a detailed text for the guides and makes this information also available in a project blog. For those not able to travel to Fort Lillo, an online version of VirtuaFort (based upon panoramic images of both the VR worlds and the current situation) was created.

The project intends to further develop and add virtual humans to the reconstruction, so that visitors can see the daily activities in the fortress such as unloading a ship, rehearsing the loading and firing of a gun or having fun in the local pub. We even want to introduce a game in the 3D visualisation, based upon the historical fact that in 1640 spies are identified that try to facilitate an attack of the Spanish army. With projects like this we aim to bring scientific research and cutting-edge VR technology to a wide range of academic and non-academic audiences, allowing them to virtually travel through time to explore local heritage.

The creation of this project has been supported by many partners. The application has been financed as a pilot project within the Interreg Europe Recapture the Fortress Cities project and the City of Antwerp, in close collaboration with its departments City Development/Public Spaces and Archaeology/Immovable Heritage. The VirtuaFort project has been coordinated by Wim Debaene (Regional Landscape De Voorkempen). The Centre for Urban History of the University of Antwerp has done the historical research, including the creation of a historical GIS system, coordinated by Iason Jongepier and Tim Soens. Prof. em. Piet Lombaerde (University of Antwerp) and Luc Olyslager (Simon Stevin Foundation) have provided advice as experts on historic fortifications. The future structure of Lillo-Fort has been designed by Cluster Landscape, coordinated by David Verhoestraete. The virtual reconstruction of Fort Lillo in 1640, the panoramic photography of Lillo, the creation of the real-time interactive 3D visualisation and the creation of the online application have been made by Visual Dimension bvba, coordinated by Daniel Pletinckx.